"I discovered EMG pickups 10 years ago and that made a huge impact on my sound and tone.I've been playing the 81/60 which gave me a tight/powerful sound and tone clarity that I wanted to achieve in my live performances and recordings with Symphony of Malice. I love the attack and punchy sound of the 81 and the warmth of the 60 for some leads or clean passages. I have been playing the new 57/66 set with my new project SINARO which gave me an amazing heavy yet smoother tone which is perfect for the sound we're going for. I highly recommend EMG pickups for every Metal and Rock guitarist out there. "

Brazilian-born guitarist GUS SINARO is fast establishing himself as a worthy warrior in the world of heavy metal. After founding and fronting the successful metallic thrash act Symphony of Malice, SINARO is about to take on the heavy music world with his own eponymous project.

Building upon the whiplash-inducing drive of S.O.M., SINARO infuses that sound with a more melodic and anthemic sheen on debut release Darkest Hours (The Rebirth) and ‘No Salvation,’ the album’s first single. The single’s accompanying music video, a gnarly, little urban nightmare. “Bullet Through Your Head” is the latest auditory and visual onslaught from this revelatory release featured on Revolver Magazine.

During his adolescence in Brazil, SINARO was quick to discover the thrill of heavy metal and hard rock after hearing Metallica, Iron Maiden and Alice in Chains for the first time. Hearing those bands ignited in SINARO a passion for singing and playing guitar. Pushing himself as much as he could, he became an accomplished multi-instrumentalist and songwriter. Then, at the age of 17, SINARO made the biggest investment in his musical career by moving to the U.S. After playing leads in a handful of local bands left him wanting, he decided to branch out on his own and create the sound he was hearing in his head.

This began with the inception of Symphony of Malice, a band whose sound was akin to that of SINARO’s peers in Trivium and All That Remains, but whose foundation was rooted in the stadium-sized thrash of bands like Metallica and Megadeth. Judgement Day (The Aftermath)¸ the debut album by S.O.M., garnered the group some commercial and critical success. That release, as well as a slew of gigs opening for monster acts like Trivium, DevilDriver, Drowning Pool, Korzus, Nervosa and Eye Empire, earned them a strong fanbase.

It also gave SINARO the confidence to go one step further and create his solo project. So, in February 2014,SINARO was unleashed upon the world in the form of Darkest Hours (The Rebirth) and its first single ‘Bullet Through Your Head.’ Building upon what he began in S.O.M., SINARO has taken the most extreme elements of his previous band and given it a bigger, more powerful approach. It maintains that metallic approach while incorporating a leaner, more hard rock sound, a la Alice in Chains, a major influence on SINARO and the record.

Ear-catching and earth-shattering, SINARO will continue to gain fans and followers worldwide. 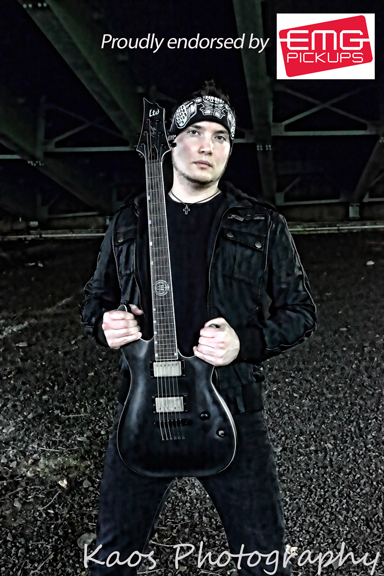