Tristan started his professional career in Amsterdam, playing in blues clubs twice a night and ente-ring many contests with his band. (back then he used to play a valley arts custom pro bentz 7/8 set with SA’s and a 85)

Back in France, he has worked as a clinician for many companies, starting with Music Man and their Luke guitar (set with EMG SLV and 85) then he worked with, Rocktron, Suhr, Fryette, Jack-son, EVH, Trex to name a few, giving many clinics a playing in the most important music fairs in Europe.

After his first EP ‘Outside’ he had his first record deal with indie US label Grooveyard Records and produced ‘Universal Mojo’, an album full of blues, rock and funk featuring great guitar players like Jean-Michel Kajdan, Craig Erickson, Greg Koch and mastered by King’s X Ty Tabor.

He also recorded songs with world famous producer Rick Allison (Lara Fabian, Diana Krall) who gave him the chance to work as an Artistic Director on the project, doing everything from playing to mixing. 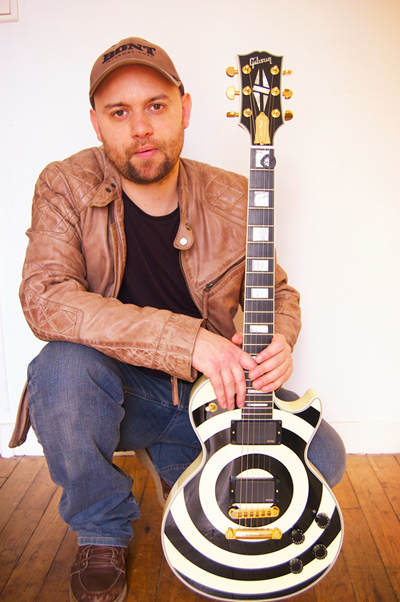