Joey Jordison is a multi-instrumentalist, song writer, record producer and much more. Joey is best known for his role as the drummer of Slipknot and also as the guitarist for his band Murderdolls.

Joey embraced music early on learning both drums and guitar before age ten. Jordison joined multiple bands throughout his high school years, which led to him being invited, at age 20, to join a new project that Paul Gray and Shawn Crahan were working on. The early seeds of this project are what would later lead to the creation of Slipknot. Jordison immediately embraced the idea and quickly became involved in all aspects of the band. Joey's dedication to music led to performances and work with many other bands over his career, including Metallica, Korn, Ministry, Satyricon, System of a Down, Roadrunner United, 3 Inches of Blood and many more.

It was September 1995 when Paul Gray approached Jordison while he was working, offering him a position in a new project. Intrigued and at a point where he was "lost", Jordison attended rehearsals and immediately wanted to be part of this new band. Speaking of this moment he said, "I remember trying so hard not to smile, so I didn't look like I wanted to join, I remained poker-faced, but I thought they ruled." A lot of Slipknot's early development was discussed by band members while Jordison worked night shifts at Sinclair's garage. He is considered one of the most dedicated members of the band and is involved in most elements of the band including writing, mixing and production. Slipknot have gone on to be one of the biggest metal bands of all time selling over 10 million albums worldwide, having numerous platinum and double platinum records and playing countless sold out shows and massive festival gigs, including headlining the 2009 Download Festival to 80,000 people.

In 2002, Jordison formed the Murderdolls with vocalist Wednesday 13. Jordison became the Murderdolls’ guitarist. The Murderdolls signed with Roadrunner Records and released an EP entitled Right to Remain Violent. The band then returned with their debut album Beyond the Valley of the Murderdolls. The effort showed Jordison’s versatility as he produced, mixed, and wrote all of the music alongside Wednesday 13. Jordison also played all of the instruments heard on the record. After a nearly two year run of touring the band went on a hiatus that lasted an unexpectedly long 8 years. The band made their comeback in 2010 with the newly revamped sound of Women and Children Last. The touring cycle for the album saw the band open for the likes of Alice Cooper, Rob Zombie and Guns ‘n’ Roses.

Jordison has performed with other bands, solely as a touring member. While preparing for the Download Festival in 2004, Metallica drummer Lars Ulrich was hospitalized for an unknown illness. Metallica's vocalist James Hetfield searched amongst other bands performing at the festival to find a replacement for Ulrich; Jordison and Dave Lombardo of Slayer volunteered. Jordison performed on 9 of the 12 songs that made up the set and was called the band's "hero of the day". In late 2004, Jordison performed with Satyricon on their tour of the United States when drummer Frost was refused entry into the country. In 2006, Jordison joined Ministry for their "MasterBaTour 2006" which consisted of sixty dates across the United States and Canada. He also appeared in the music video for their single "Lies Lies Lies". Korn recruited Jordison in 2007 to join them on tour when drummer David Silveria went on hiatus from the band. While touring with Korn, Jordison set a record by becoming the first musician ever to perform on five different occasions at the Download Festival in England. He also appeared in the music video for Korn's single "Evolution".

Starting in the Spring of 2010 Joey became the touring drummer for Rob Zombie and went on to record a few songs for the re-release of Zombie’s Hellbilly Deluxe 2. Joey continues to tour with both Zombie and the Murderdolls recently heading to Australia to play with both bands on 2011’s Soundwave Festival.

Next up for Joey is heading to Europe for the upcoming live return of Slipknot which will see them performing as part of several Sonisphere shows, the Rock In Rio festival and several other shows! 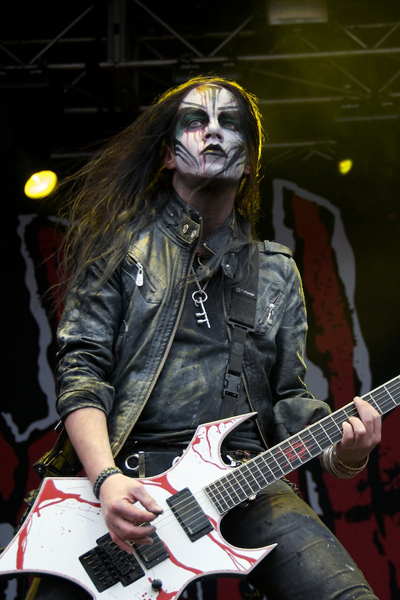