Combining raw riffs with big hooks and vocal harmonies, Hinder take their cues from rock legends like Aerosmith, AC/DC, KISS, and Guns N’ Roses, and update them with modern guitar sounds. Their triple platinum debut Extreme Behavior documented the decadence and strained relationships of these retro rock juggernauts, whose subsequent cover of Steppenwolf’s “Born To Be Wild” for NASCAR last year was a natural extension of their lives on the road.

Now they are seeing how far they can push themselves musically and physically with the equally rowdy but more melodic Take It To The Limit, due out Nov. 4th, which is destined for equal if not greater triumph than its predecessor. Lead single “Use Me” has already generated massive radio buzz and impressive iTunes sales. Overall, the album is a potent blend of raucous anthems, melodic rockers, and introspective ballads that invokes the classic rock of the ‘70s and ‘80s.

What gives Hinder’s music the stamp of authenticity is the wild ‘n’ wooly lifestyle they lead. They do everything to the max – downing Jägerbull shots like water, encouraging audiences to “Get Stoned” each night, and partying with Playboy models on the set of their latest video. They even got the stamp of approval from one of their idols, Motley Crue guitarist Mick Mars, who shreds on the title track to Take It To The Limit.

In spite of excesses that would hamper lesser bands, Hinder’s success is driven by pure passion and perseverance. Seven years ago, vocalist Austin Winkler fronted a cover band in their hometown of Oklahoma City, and he met drummer Cody Hanson and guitarist Joe “Blower” Garvey through a fraternity party gig. “I kept on running into them and partying with them,” the singer recalls. “Then we jammed. We got together with one song and played it about 75 times. We recorded it on a piece of shit karaoke machine and played it to everybody. They thought it was amazing, even though it was probably the worst sounding thing ever.”

Anxious to boost their career into the stratosphere, the fearless fivesome snagged a loan for $45,000, journeyed to Vancouver, and recorded six demos with producer and future songwriting collaborator Brian Howes. But that was just the beginning. “Then we got our deal and re-recorded different versions of them as well as the other six songs,” recalls Blower. They signed with Universal Records after a bidding war ensued between three major labels. Ironically, Hinder had never played a show outside of Oklahoma.

Once they were signed, Hinder played anywhere and everywhere, from a crowded houseboat to a small club with a faulty sprinkler system that could have gotten them electrocuted. But they slugged it out for a year and a half before shattering the mainstream music barrier. Thanks to hard work, steady touring, and strong video airplay for their balladeering ode to infidelitous intentions, the crowd-pleasing “Lips Of An Angel,” which gets arena audiences singing along, they eventually sold three million copies of Extreme Behavior.

“One of the things that I think is cool is that we really put our lives and what we’re going through into our music,” states King. “I think that’s why people relate to a lot of our songs so well.”

A new tune destined to become a crowd-pleaser is the arena-ready title track for the new album, which features a guitar solo from Mötley Crüe axeman Mick Mars. The members of Hinder were ecstatic to receive him. “Mick Mars was all for working with us, and being huge Mötley Crüe fans we jumped at the opportunity,” enthuses Winkler. “We took the song to him, and he killed it! He heard the final version and said, ’It was a beautiful thing.’ We went to his house, and it was like the Batcave – nothing but guitars and amps. He is a vampire and so are all of us. It was an honor!”

While Hinder’s Take It To The Limit offers its share of party hearty rockers like the title track, “Use Me,” and “Up All Night,” the group also explores some angst in “Loaded And Alone,” with the lyric, “He wanted fame, even just a little bit / A shame, he would sell his soul for it.”

“I don’t want to say we wrote that about a specific person, but there are people who have some success and let it go to their head,” remarks Winkler. “They also don’t let anybody in and go through life without making any real connection [with anybody] and losing all their family and friends. We meet a lot of people like that in the industry.”

Another new song that offers personal insight is “Far From Home,” which was written on the road and tackles the subject of keeping a long distance relationship alive. “You can definitely do it, but it is a lot of work,” notes Hanson, “especially when you’ve got so many people out there dying to get into your personal life.” The drummer is referring to all the photos, misinformation, and innuendo that spread throughout the Internet at light speed. “I’ve died two or three times already,” quips Winkler. “I look pretty good for a corpse.”

On the flip side of the online conundrum, Hinder’s MySpace page has generated a staggering 28 million visits. “We had the number one MySpace page in all genres for a while, so we were getting ten messages a minute,” recalls Hanson. Given the feeling of instant gratification that online communication creates, one might think that the band might not be able to fulfill all of the expectations of their followers. “I think we’re pretty good to our fans,” counters Winkler, “and they’re amazing to us. We have events that allow them to come meet us.”

While life on the road is fun – and the band will be pounding the pavement for months to come – those long stretches of open highway can be tiring and dull. That’s where Blower comes in. The amiable guitarist, who obtained his nickname from his sexual exhibitionist tendencies, is the class clown of the band, literally. Blower will do anything for a laugh, even light his own testicles on fire. “I’d say Blower’s the secret to our success,” says King, only half-joking. “We’d be bored out here if it weren’t for him.”

Shenanigans aside, the boys in Hinder have worked hard to earn their touring stripes. “We did bust our asses to get here, but we have had a lot of fucking fun doing it,” proclaims King. “We’ve been doing it for a while and are still having a great time.”

Millions already jumped onto the Hinder bandwagon to indulge in Extreme Behavior. Millions more will soon join them in their quest to Take It To The Limit. 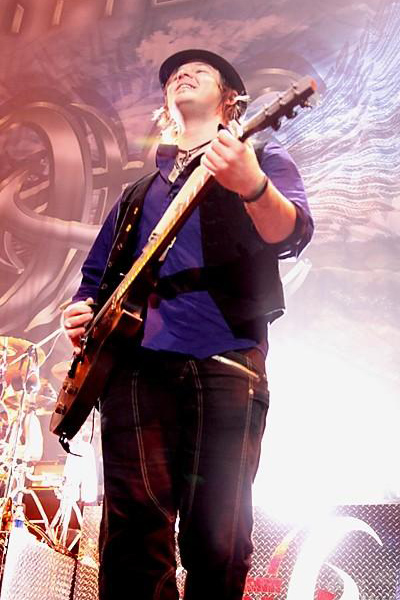