Merging unparalleled musical bravery, flawless execution, and an angular landscape of forward-thinking ideas, one inspired Bay Area band has crystallized on the dead soil of music as art.

Founded in 2003 by brothers Wes and Jeremy Fareas, the New Approach to Martyrs Expressions [Name], is an amalgam of experimental tech metal, grindcore, ambient sounds, freeform jazz, blues, cultural world music, an odd sense of humor, and maniacal mood swings. Known for their chaotic energy, Name breathes vivid new life onto the stage. "If we have to act like old men [and] slugs, just to go on stage for 30 minutes to destroy every other band you’ve ever seen, then its worth it," singer Wes commented to 'YO! TV.'

Also infamous for their sadistically wild antics and controversial standpoints, Sprawl Magazine says "Their music gives a lot of poetic personal messages, with a twist of sarcasm, and violence." In an industry overrun by bloodthirsty carbon copies, Name faces the stampede with words sharp and ready, with an aesthetic, cerebral kick to the head. "A disheartening aspect of music today is the lack of honesty in a sound drowned in juvenile, nonsensical lyrics," admits Wes. Aside from their fierce ability and creative dedication, there's something about Name that begins with a curiosity, summons intrigue, but festers into an all-out fascination as the sounds and colors fly by.

While our eyes have adjusted to discern bands from the pixels in their logo, designers standing by with a swatch of skull graphics and an overcompensating myspace layout, Name steps out of the confines of the expected, swearing to the sense of bedlam in art that is currently left abandoned. "Music isn't supposed to be safe, it's meant to catapult you into a risky situation," says Wes. "We want to revive danger in art. We're trying to show that as much as possible."

But what is further promising is the band’s ability to survive and evolve when reality deals the worst of hands. Having survived member changes, theft, a freeway accident on tour in which the band’s van rolled down a steep hill 7 times, and the ensuing hospitalization; the passion prevails. With personality and passion in the portrayal of art, Name restores honesty in music.

With all new genre-bending material on their 2010 Lifeforce Records debut, ’Internet Killed The Audio Star,' Name have set out to remold all the stagnant preconceptions of heavy music. Vicious, progressive, passionate, and thoroughly unpredictable witness what a group of artists are capable of feeling.

Bios can be jaded and misleading... Bottom line: we're just 3 guys who live and breathe music and love writing and performing such. 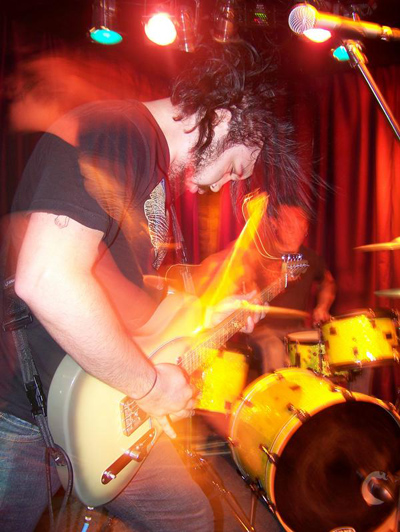