Sixteen years old in 1978, Vivian Campbell's first band Sweet Savage hailed from his hometown of Belfast, Northern Ireland. Along with other hard-core bands like Budgie, they were pre-cursors to bands like Metallica who were strongly influenced by Sweet Savage's sound, and later recorded their own version of Sweet Savage's "Killing Time" for their "Garage, Inc" album.

Out on tour supporting bands like Thin Lizzy and Motorhead around Britain, Vivian caught the eye of bassist Jimmy Bain, who would soon join Ronnie James Dio to record his post-Black Sabbath solo debut for Warner Bros. In searching for a dynamic, powerhouse guitarist, Jimmy recalled his memorable impression of the young unknown Vivian, and recommended him to Ronnie. Vivian was 19 when he auditioned and that line-up went into the studio to record the now classic Dio albums "Holy Diver" and "Last In Line".

The boy from Belfast was on his way. In 1987, Vivian was invited to join Whitesnake. In 1991 during an extended hiatus from touring he would finally begin writing songs for his own debut solo album for Epic Records, writing collaborations produced beautiful demos and recording of the album was about to commence when the call came from Def Leppard singer Joe Elliott. The tragic death of guitarist Steve Clark left a gaping hole in the line-up of one of the world's biggest selling acts. Always having been a fan of Def Leppard, it was a crossroads decision; you only get one chance to join a legendary rock band, and the solo album was put on hold.

Thirteen Leppard years later the time finally came to pursue a solo album again, but this time the direction would take a different form. Living in Los Angeles, Vivian had immersed himself in the world of the local blues-club circuit, quite a change from the intricate arrangements, multi-overdubs and state of the art production values of Def Leppard. The spontaneity and "one-take" urgency of the true blues genre dictated a specific new set of rules that would be applied during the making of his solo CD "Two Sides Of If."

Vivian is still a key member of Def Leppard to this day and is currently using our X series and standard 81 & 85 humbuckers. 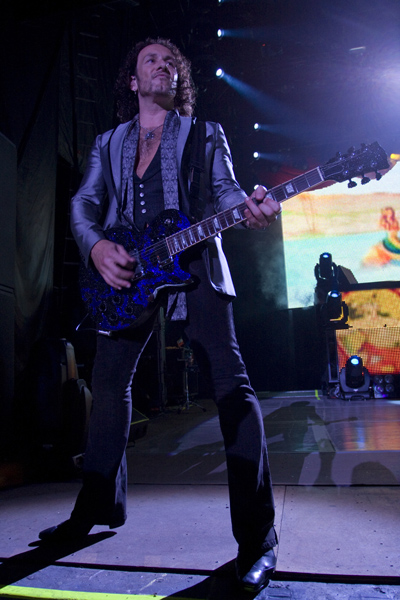