Doug Wimbish is having an amazing career. A highly respected and sought-after master of his instrument, Doug records and performs with a diverse roster of talent. From his early days with Sugarhill Records, to his pioneering work in TackHead and Living Colour, Doug is best described as a musical virtuoso. His repertoire reads like a whose who of Rock, Pop and Hip-Hop; The Rolling Stones, Mos Def, Depeche Mode, Madonna, and Jeff Beck, to name a few.

These past few years have kept Doug extremely busy. He has been producing, recording and touring with Living Colour, TackHead, Little Axe, Headfake, Mark Stewart & The Maffia, Czech gypsy funk band Gulo Car, Brazilian singer Fernanda Porto, and Nightwish vocal sensation Tarja Turunen among others. Continuing to bless the stage at festivals and venues around the world, Doug displays his mastery of blending music and technology to lay his explosive rhythms that move the masses. 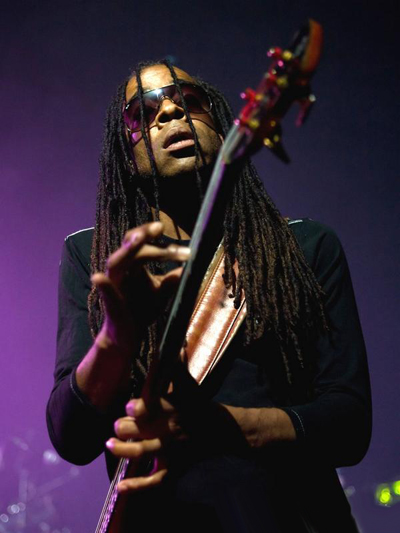