John McVie is best known as the bass guitarist for the rock group Fleetwood Mac. He was with the group from its formation in late 1967, through to their separation in the early 90s, returning when the group reunited in 1997. He married fellow bandmember Christine Perfect, then divorced her in 1977 during the making of the album Rumours.

McVie was born in Ealing, London, and attended Walpole Grammar School. He joined John Mayall's 'Bluesbreakers' in the early 1960s through which he forged a friendship with the so-called 'Godfather of British Blues'. In 1967 he joined Peter Green and Mick Fleetwood to form Fleetwood Mac, and they enjoyed moderate success in Europe. After Green's departure, he moved with the members of Fleetwood Mac to Los Angeles in the early 1970s and has remained there ever since. A naturally reticent man, his involvement within Fleetwood Mac has been constant but notably low key, despite the fact that the band takes the 'Mac' part of its name from him. He received co-writer credits for a very small number of tracks throughout the band's existence, including "Station Man" and "The Chain". In 1992, he released a solo project John McVie's Gotta Band, before reuniting with the Rumours-lineup for Bill Clinton's inaugural ball. He was inducted into the Rock and Roll Hall of Fame in 1998 along with other members of Fleetwood Mac. 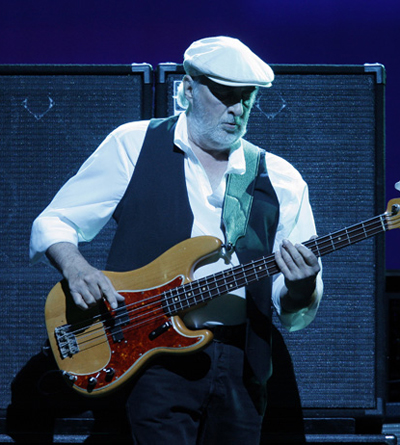