Brian Lowe was born in a small town in the foothills of the NC mountains. His father, who not only co-founded Merlefest, had Brian's musical instruction handled by Dove Award Nominee/5 Time Southern Gospel session musician of the year David Johnson.

By the time Brian was 12, he was reading charts and playing gigs in clubs around NC. He also played in drumline and guitar in jazz combo in school. During this time, he discovered Dire Straits and Steve Lukther at the same time. Brian's style is a very ecclectric mixture of country/fusion/pop, which works well on the various sessions he had done.

He has also been musical director in several projects, as well as served as a guitarist in the US Army for the MWR department to entertain troops. He worked for Line6 for 3 years as a Product Specialist/clinician, as well as being a very in demand studio/live guitarist/vocalist in the Colorado scene.

Brian is now living in Ft Worth, Texas, after a susccessful 2 year tour which lead to several top 10 Cashbox singles, and works with such artists as Noel Haggard, Clint Moody, Hank Thompson's Brazo's Valley Boys, as well as being a session guitarist who does sessions in NC/SC/VA/FLA/CO/WY/TX/TN as well as writers demos in his home studio for Dak Alley (Alabama writer), and John E. "Pap" McCollum (John Michael Montgomery, Toby Keith, Faron Young, etc...)

Brian's EMG gear includes the 81TW, 89, SAX, SA, 81, 89, as well as 2 T sets. "I think the rear tele pickup is EMG's best kept secrets, and with a SPC control, I can do anything with one tele if I get caught on stage with my tele as the only guitar on and no time to change!"

Brian is currently signed to Big Noise Records out of Denver Colorado, and his first solo CD, "An Absurd Notion" is in the final mixing stages, which will feature Brian on vocals for the first time. Brian also arranged, co produced, did all the guitars and acted as session leader on the upcoming Texas Artist Clint Moody's newest release. Most recently, Brian took his EMG equiped Tele to the James Burton Foundation 2009 Guitar-fest, where he got to hang out with fellow EMG'er Steve Lukather. Brian really wants to be Steve when he grows up. 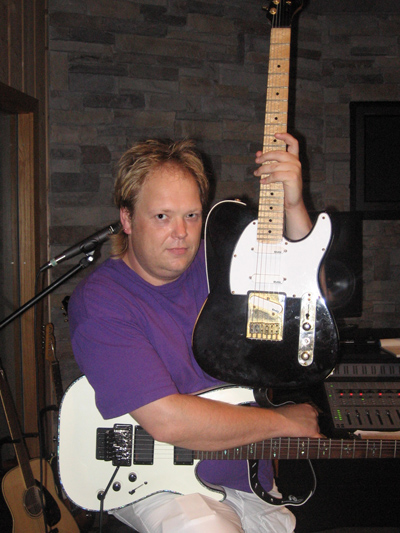