Although everybody seems to have a different account of who came first in the world of New York/New Jersey area thrash metal, it seems certain that New Jersey’s Derek Tailer and Overkill have stayed around the longest, and have never let their fans down by remaining musically consistent and true to their roots for over 20 years and an unprecedented 14 full length albums. By 1987’s Taking Over, the band had worked their way up to a deal with Atlantic Records. This relationship would last another 7 years based on the strength and consistency of Overkill’s music.

1988’s Under The Influence and 1989’s The Years Of Decay represent Overkill in their prime. Sid Falck would replace Rat Skates on drums to bring his own brutal percussive assault to Verni’s already powerful rhythm section. The band had already established a rabid fan base with songs like “Rotten To The Core” and “Hammerhead” (as well as their infamous cover of D.O.A.’s “Fuck You”), and new songs like “Evil Never Dies” and “Hello From The Gutter” would become Overkill mainstays as well. A video for “Hello From The Gutter” was garnering much fan response when it received play on MTV’s “Headbangers Ball”. 1994’s W.F.O. would be Overkill’s final album with Atlantic, as they would release their first official full-length live assault, Wrecking Your Neck on CMC in 1995. 1996-1999 would see Overkill release 3 more full length albums (Killing Kind, From The Underground and Below, and Necroshine). In 2000, Overkill released Bloodletting on Metal-Is, adding guitarist Dave Linsk to the fray. The current Overkill lineup would be completed with the release of the live album Wrecking Everything and the addition of second guitarist Derek Tailer in 2002. Finally, Overkill would release one of their most well-received albums to date Killbox 13 on Spitfire Records in 2003. As fans rabidly await the imminent release of their latest contribution on Spitfire, ReliXIV, it seems obvious that Overkill are, and always have been, a band that knows who their fans are, knows what true metal fans expect, and will settle for nothing but the best from themselves. An entirely self-produced album, ReliXIV is a continuation of the Overkill legacy. Immortalis, the band..s 15th studio album was release in October 2007 via Bodog Music.

Now with Nuclear Blast Records, it seems the band has finally found themselves a home.

The upcoming album features Overkill's latest lineup, which, along with founders Bobby "Blitz" Ellsworth and D.D. Verni, includes guitarists Derek "The Skull" Tailer and Dave Linsk, as well as the newest member to join the band, drummer Ron Lipnicki.

There are few names as well respected as Overkill, and with the resurgence of metal in the music world, this band is poised to return to the top. Overkill are ready to show mature metal heads they still have it and are geared up to teach the new schoolers exactly how it's done.

“ Ironbound” is one hell of a thrashing piece which leads the band back to their old-school roots! 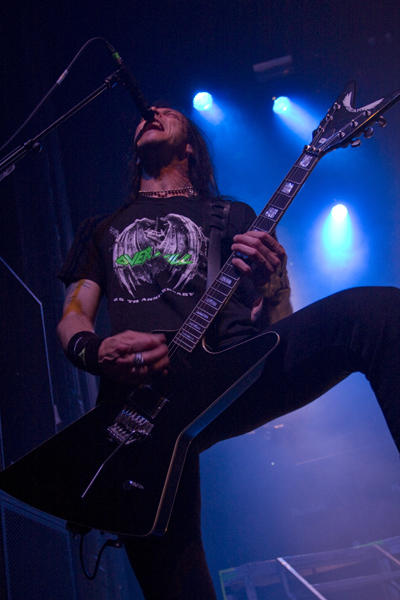