Gav King/ Fields of the Nephilim

"I’ve been an EMG user for over 10 years as their clarity and reliability is second to none. I love using the 85, fairly uncommonly, in the bridge position as I get tight rounded organic tone with awesome response and that extra bit of bottom end."

He grew up near Peterborough, England where he began playing the guitar at the age of 13 after hearing the monstrous tones of Hetfield & Slash.

In 2002 he co-founded metal band, The More I See with Gizz Butt. TMiS toured throughout Europe, signed with SPV Steamhammer and released 2 full-length albums to critical acclaim. It was during this period that Gav started moulding his sound, using a Les Paul Custom and a Vanquish signature guitar both loaded with EMG 81/85 sets through Peavey 6505s.

In May 2007 Carl McCoy invited Gav to join ‘Goth Fathers’ Fields of the Nephilim before their 24th Moment live return show at the London Astoria. Gav has become a major part of the group having headlined festivals all across Europe. Shows at Shepherds Bush Empire in London were filmed and released as a live double album and DVD entitled ‘Ceromonies’ in 2012.

As Gav’s sound progressed he moved towards the EMG 85/60 combo as his main set to get a more rounded sound although he still uses the 81’s for the lower tuned heavier riffage. He now uses ESP Ltd guitars exclusively; all loaded with EMGs, and cranks them through Peavey 3120 amps. 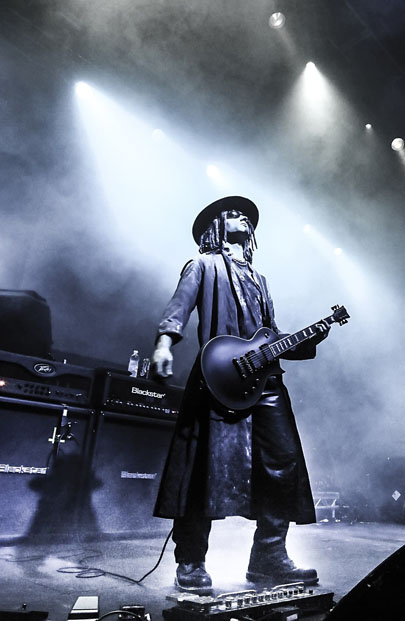