Tommy received his first guitar at age thirteen. Drums were actually what he wanted- but the guitar is what he got! This guitar was the biggest hunk of junk ever crafted. After learning a handful of chords from a family friend, he began trying to figure out riffs from all his favorite bands. It was the seventies so Tommy cranked out tune after tune from Zeppelin, Aerosmith, Sabbath, Cheap Trick, and KISS!

Fine tuning his guitar playing throughout high school in the eighties was not easy. As the seventies melted into the eighties guitar had morphed into something fantastic including the introduction of the shred guitar. This meant the average guitarist had to become better than average. Tommy’s numerous garage

Tommy left Heathen in 1985 to attend GIT (Guitar Institute of Technology) in Hollywood. This allowed Tommy to study guitar with Paul Gilbert (Racer X, Mr. Big), Frank Gambale (Chick Korea) and Jennifer Batten (Michael Jackson, Jeff Beck) just to name a few. GIT laid the foundation for Tommy to expand his style, range, and his technique. Graduating with honors in 1986, Tommy found himself back in Northern California and ready for the next gig. Wynch was an established band with a different sound. The band’s pop oriented hard rock songs earned them the attention of producer/singer/song writer Jessie Bradman (Night Ranger). Wynch recorded their 2nd EP Shut Up and Pay Attention on RMR Records.

This EP featured Tommy doing back to back guitar solos with one of his idols Jeff Watson of Night Ranger on the track Oak Park Shuffle.

In 1987, Tommy joined the coaching staff of “Stairway to Stardom”, an award winning summer music program in which students are placed in bands and coached through the essential steps of writing, performing, and recording. Tommy was half of the treacherous guitar harmony team in Wynch, which signed a deal in 1991 with Artful Balance/Warner. The band headed to Hollywood to record their debut major label album Sucker Punch with producer Davey Johnston (Elton John), one of Tommy’s heroes. The album was unfortunately shelved in 1992.

The band went through a few member changes and returned to Hollywood in 1993. They secured a production deal with Hollywood Sound. Working with producer Martin Smellsly (Danzig/Black Crows) the band recorded a brilliant full length album with drummer Michael Frowein (Lynchmob) and bassist Dan McNay (Frank Hannon Band). This album did not get picked up even though the work was the band’s most amazing effort to date.

Ready for a major change Tommy took a brief break from the road to focus on publishing his first guitar instructional book Chord Camp 1. Tommy concurrently opened a recording studio and began producing and engineering. He worked on his book feverishly while he was touring, recording, and teaching an average of 50 students a week. Chord Camp 1 landed Tommy a distribution deal and rapidly the book was being sold in 8 countries. This led to two immediate sequels, Chord Camp 2 and Chord Camp 3, both released in 1994. 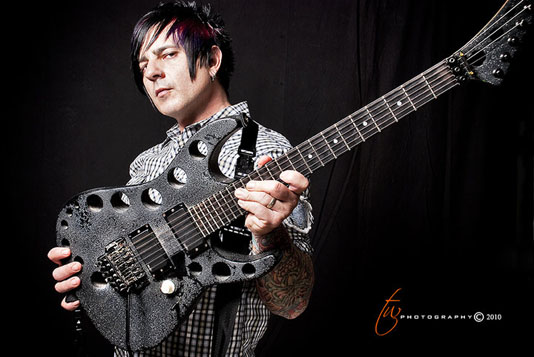