Sal Coz Costa/ My Darkest Days

I was born Salvatore Costa on July 7th, 1986. I am the youngest of three children with two older sisters - Monique, and Cathy. At the age of 4 I began playing piano after being mesmerized by my eldest sister Cathy’s fluent and prodigy-like abilities to play the instrument. It was around this age I had also began painting elaborate pictures and sketches. My parents began to recognize my artistic talent, and decided to enroll me in art lessons with a family friend. Painting, drawing, and sketching really inspired me at this younge age. Most people I talk to don't remember a thing from when they were that young. I guess my life was just so full of colour ever since I was a toddler that it's just kind of hard to forget. I'm glad I haven't.

After a few years of playing piano I became infatuated with the rock n’ roll culture by my middle sister Monique who was a huge influence on me. She bought me my first guitar at 8 years old hoping she could morph me into a pre-pubescent rock star. Monique gave me weird hair cuts and clothes that were popular in the grunge rock culture. I proceeded to get my first piercing around that time. It happened one summer day when I decided to hold a local neighbourhood street hockey game. I figured a ton of kids playing hockey on the street would be enough of a distraction while a snuck away and ran down to the local hair salon to get them to pierce me. My parents freaked out when I walked in the house with silver in my ear. I was just 8 years old. I have always tested my parents patients, but I owe them everything as they have always pushed and supported my dreams.

It was around this time I stopped art lessons. But I never really stopped doodling. I still doodle all the time actually, but nothing too serious unfortunately.

At age 10 I started taking guitar lessons with Frank Cosentino, a pretty big shit 80’s guitar player gone blues. A killer player, teacher, mentor and most importantly - friend til' this day. Frank fueled my love for rock and grunge, and taught me everything I know about the guitar. How to play it, how to feel it, and how to write with it using that little thing that beats in my chest... and not the accountant in my head.

I started playing in bands almost immediately when I started taking lessons - I begged my parents to buy me a drum kit and another guitar so I could invite friends over and teach them how to play. I became so obsessed with music that before my friends would come over I’d hide my Nintendo and all my toys so they were forced to stay there and play music. I wanted no distractions for anyone. In retrospect, it was pretty much torture for them until their parents picked them up later on in the day.

Around this period I fell in love with the John Lennon of my time – Kurt Cobain. I wanted to be Kurt in every way possible. I purposely tried to re-learn playing my guitar left handed to be just like him. I grew my hair long and died it blond at age 12. The only thing I was missing was a goatee, and I was unfortunately too young to grow one. Kurt turned my world around and introduced me to a dark culture most of my little Spice Girl and Hanson listening friends couldn’t even imagine or capacitate. I studied Kurt’s lyrics, approach, and fearless persona. He still truly amazes me today.

I continued getting pierced around this age and continued writing songs. When I look back now I laugh, but I guess the content of my writings were pretty serious for a 12 year old.

When I was 16 years old I snuck out of my hotel room in New York City on a school trip at 3am to get tattooed in one of the city’s ghettos. This triggered my addiction to tattoo's and I don't ever think it will stop. Getting tattooed is the most bitter-sweet pain I think a person can ever feel. Clinching your fists in pain as someone paints a beautiful mural on your virgin skin... there is just something so soothing about that.

As my high school years proceeded I continued to write music, lyrics, and tried to perfect my art. I also began singing which is something I always swore NOT to do. My dream was always to be the “Slash” in a band. The silent guitar player. Didn’t really end up that way. I saw lots of different girls when I was younger. Actually, now that I think about it, the majority of my friends were always girls. I wouldn't ever say I was a player though, more so just curious into seeing how flexible everyone was. Haha kidding.

As time went on I decided to enroll myself in University. I studied Flamenco Guitar and Jazz Guitar, and also Business. But I rarely attended any of my Business classes and could most often be found asleep in the cafeteria or library. I truly fell in love with Flamenco Guitar. Everything about it. It just touched my soul and all I wanted to play or listen to was Flamenco music. Near the end of my first year of University I received a call on my cell phone one afternoon. It was my Flamenco professor asking me if he could come to my house to talk to my parents. I remember feeling worried as to what he was going to say or do when he came over, nonetheless I agreed to his attendance. He finally came over to my house and told my parents that I needed to leave school, and that school wasn’t going to make me succeed in being the type of musician I wanted to be. He told them I needed to get out there and tour with my band. He told them that if I wanted to be a rock star, I needed to act like one, and that rock stars aren’t supposed to hang around Universities. My prof’s name was Roger, and I owe him so much for that conversation he had with my parents. I left school and never looked back.

Shortly after this a few of the band’s demos got into the hands or producer Darren Grahn. Darren had been known for working with bands like Motley Crue, Bon Jovi, and Metallica. After a few phone conversations it seemed like almost seconds later we were on a plane to record an album with him in Vancouver. While we were in Vancouver living out of a hotel room for almost 2 months, I began fighting a ton of depression and anxiety that I never really felt before. I guess just the fear of the unknown really terrified me. Also, I began thinking about death, and it started tripping me out. This resulted in an extreme loss of weight which pulled me down to around 116 lbs, which is tiny for a dude who is 5’10.” Before we had gotten to Vancouver I was around 165 lbs. I looked like a skeleton or some type of alien. I was dating a half Japanese actress/model at the time and I was probably around the same weight as her. She’d always ask me, “how do you stay in shape like that?” The answer was usually “not eating, not sleeping, and pacing all day worrying about stupidity.” I would faint pretty often.

This became a pretty scary time for me. I was fighting a lot of weird battles in my head and ended up in and out of hospitals as I began to fear the idea of death. I began getting panic attacks which I thought were heart attacks. Anxiety isn’t a fun thing for anyone who has battled it. After almost a year of suffering, I ended up talking to a friend of a friend. He said a phrase that just stuck in my head and pretty much cured me instantly: “Sal – what the hell are you depressed about??? You’re 20 years young, and you’re not half bad looking, if I were you I’d be getting my d*ck wet every chance I could!!! You need to just get out there and bang some chicks!!! You can worry about heart attacks and all that bullshit when you’re my age!!!” The sheer humour and delivery of what he said just snapped me out of my trance. I was healed.

I never really fell back into that mindset ever again. I decided to turn my life around and focus on my mental, physical, and emotional health. I’ve never really looked back since and have continued pushing forward and writing more music. My one goal in life is to infect people with my words and melodies. I essentially want to start a cult-like group. A world-wide clique of people that can all call each other family. A family of rock I guess you could say...you. 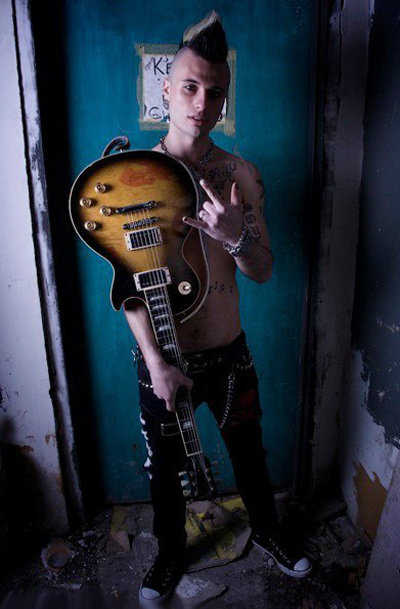