Bassist Kyle Sanders is a former member of Bloodsimple, the NYC-based band founded in 2002 from the remains of legendary New York hardcore band Vision of Disorder. Formed in 2002 by Tim Williams and guitarist Mike Kennedy (both of whom were members of VOD), the band - which also features guitarist Nick Rowe - were initially discovered by Mudvayne vocalist Chad Gray in 2004 and instantly hit the road with peers such as Otep, American Head Charge and Candiria. The band toured with everyone from Stone Sour to Alice in Chains to Slayer, introducing their unique brand of groove-driven metal to anyone open-minded enough to listen.

Sanders hails from Atlanta, GA and made a name for himself with Piece Dogs, industrial-metal trailblazers Skrew and Medication before being tapped to hammer out sledgehammer-like bass lines on Bloodsimple''s 2005 debut album "Cruel World" and in 2007 "Red Harvest." Bloodsimple also garnered some recognition for their work on the soundtrack for the horror film "House of Wax," which premiered in 2005. It features the Bloodsimple song 'Path to Prevail.'

Since the untimely demise of Bloodsimple Kyle has formed MonstrO along with Juan Montoya, Bevan Davies and Charlie Suarez……and in 2013 was recruited by HELLYEAH to take over all things bass !!! 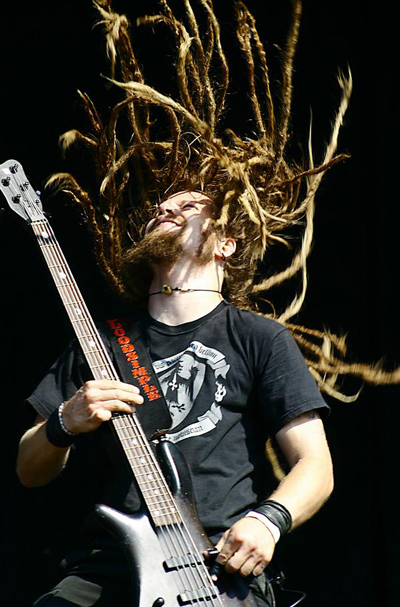