Andy Irvine is best known for his driving bass

vast experience performing on the road and in the

studio find him equally at home holding down thick

and all points between. He has been influenced by funk,

With a playful musical personality and dynamic presence on

the stage, Andy radiates with passion and love for his

As a top call freelance side man/session musician Irvine

the studio with various artists covering a wide range of

styles. Andy is currently touring and performing live with:

and his own funky blues act-Andrew Irvine Group,

Andy has contributed his solid bass work to

50 albums with national and international artists.

Irvine was featured in an interview/article on soloing in

the March 2009 issue of Bass Player Magazine, the magazine

refers to him as a "soloist sensation". He is a

dedicated educator of music and is currently presenting

concert clinics nationally with the support of his sponsor/endorsements:

Since launching his clinic series in 2009 Andy has presented 35 bass clinics nationally,

In 2012 25+ clinics are slated with Warwick and EMG as sponsors.

Throughout 2012 the tour will hit 25 cities across the entire USA, in each city there will be a massive promotion and thousands of

dollars worth of FREE giveaways including Warwick basses, amps, and strings, EMG pickups and much more 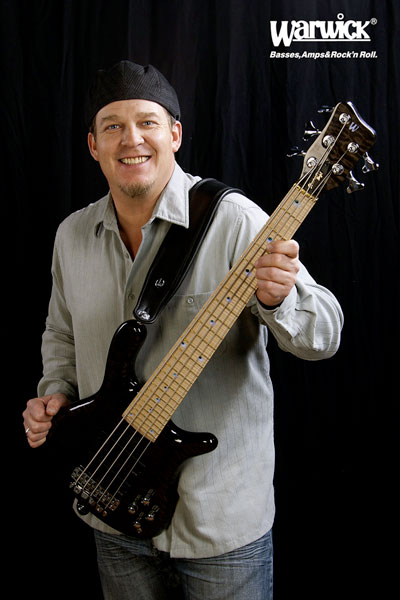