Dean Back/ Theory of a Deadman

Vancouver, Canada's Theory of a Deadman became the first act to sign with Nickelback frontman Chad Kroeger's 604 Records imprint in 2001. Tyler Connolly (vocals/guitar) reportedly slipped a copy of the band's demo to Kroeger at a post-concert party and the two were soon collaborating on songs together. One of these, "Invisible Man," was used as the B-side for 2002's wildly successful Spider-Man theme, "Hero" (a Kroeger collaboration with Saliva singer Josey Scott), and anticipated Theory of a Deadman's self-titled debut of the same year. Also featuring Dave Brenner (guitar), Dean Back (bass), and Tim Hart (drums), the album's hook-laden, emotional hard rock sounded very similar to their celebrity benefactor's band -- almost disturbingly so, actually. But a healthy touring workload and simple maturation ultimately helped Theory of a Deadman break out of that confining stylistic box for their more varied and distinctive sophomore effort, Gasoline, which was recorded with session drummer Robin Diaz. The trio later tapped veteran journeyman Brent Fitz (formerly of Union and Vince Neil's solo band) as their new permanent touring drummer. Theory of a Deadman returned to the studio in 2007 to record their third album, Scars and Souvenirs, which was produced by Howard Benson. The album was released in April 2008 and in 2009 are touring to support the new album with Motley Crue's Cruefest 2 Tour. 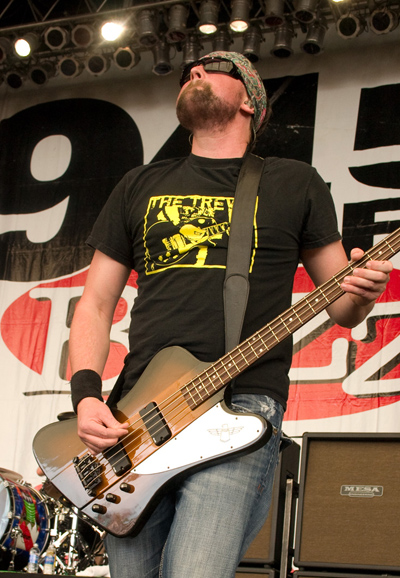