Ahrue Luster is the lead guitarist for the Latin Metal band Ill Niño. He is also the former guitarist for Machine Head as well as Manmade God.

He joined Ill Niño during the recording of their second album, Confession. He was asked to try out by long time friend, Dave Chavarri, who he had originally met during the Thrash Metal heyday of the San Francisco Bay Area.

Ahrue has an ESP Signature Series guitar. The guitar was released while he was in Ill Niño but was based on a design that he came up with while he was still in Machine Head. The guitar is thinline, EMG loaded sunburst ESP Viper that has spades as fret inlays. He chose the spade inlays because his mother, who bought him his first guitar, was a career blackjack dealer in Las Vegas.

Ahrue has become one of the main songwriters and musical contributors in Ill Niño, and is a great fit for him musically because of his love of not only aggressive, heavy music but many other styles of music including the cultural music of South America and Spain. Ahrue grew up listening to Metal but as he became more and more of a musician he explored many other styles of music. 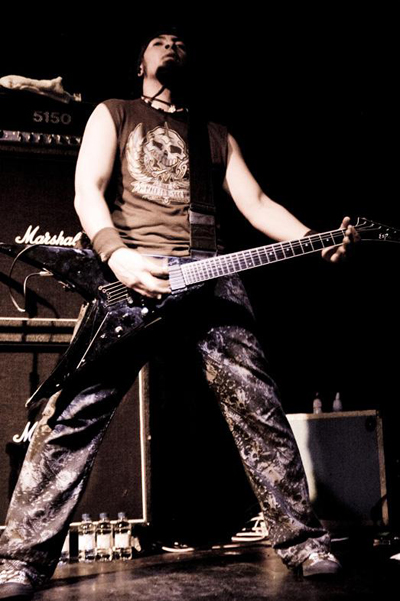